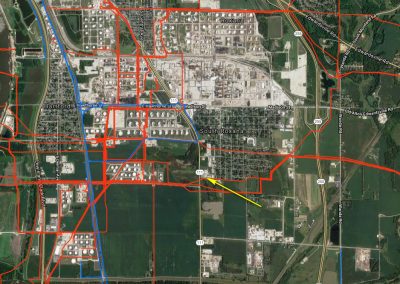 PLANT SUMMARY:
The St. Louis Biodiesel, LLC facility was originally built in 1995. It underwent an $8,000,000 dollar transformation into a biodiesel production facility in 2006. It is one of nine biodiesel plants in the state. The plant is capable of producing up to 12 million gallons of biodiesel per year. The plant is multi-feedstock capable and used soybean and vegetable oil. The plant has had several major upgrades most notably a large tank farm upgrade in 2014. The plant sits just south of the Wood River Refinery owned by Philips 66/WRB Refining and is roughly 24 miles east of St. Louis. The plant is now idle and will be sold during a sealed bid auction process.

To view documents related to this sale that may aid you in your due diligence, please complete and return this release.

The plant is located just east of St. Louis. Turn North from I-270 onto State Route 111 and head straight approximately 5 miles. The plant will be on your right.

Sealed bids will be accepted by Maas Companies until Wednesday, June 27, 2018 at 4:00 PM CDT. Sealed Bid offers must be received by the deadline and be accompanied by a $20,000 earnest money deposit (check or wire) along with a fully completed and notarized Bidder Kit. Deposits will be returned to the unsuccessful bidders. Bids must be delivered by traceable courier to Maas Companies Inc at 6923 10 Avenue SW, Rochester, MN 55902. Deposit monies are payable to ATEC, Receiver for St. Louis Biofuels and will be held in escrow as such. Wire transfers are acceptable. All bids are subject to Seller’s acceptance on or before Thursday, June 28 at 4 PM CDT. Bidders will be notified of the Seller’s decision in writing via email. At this time, the Seller, in its sole discretion, may either declare one of the bidders the winner and the auction process ended or in the event of a tie, the Seller may invite the high bidders to participate in a limited live auction. Should the auction process continue to a limited live auction, the event will be held on Friday, June 29 at 11:00 AM CDT. Buyers will be able to participate via phone. Buyers are strongly encouraged to submit their highest and best offers by June 27, 2018 at 4 PM CDT. The Sealed Bid Auction process is binding and offers are non-revocable, buyers should request and thoroughly review all documents prior to submitting a sealed bid offer. The auction is being held as a result of the Regional Growth Capital, Inc v St Louis Biofuels, LLC et al Case No 16SL-CC02399, Circuit Court of St. Louis County. To obtain a Bidder’s Kit, please contact the auction company at 507-285-1444.